We Are Here To Help You! View Our COVID-19 Updates

Admitted To The New Jersey And Federal District Court Bars

Mr. Valenzano is a partner at McOmber McOmber & Luber, P.C. Mr. Valenzano’s primary areas of practice are employment law and civil litigation.  Mr. Valenzano actively litigates in all areas of employment law, including but not limited to matters involving discrimination, retaliation, wrongful termination, as well as non-compete, whistleblower, wage and hour, and qui tam actions.

As an employment attorney, Mr. Valenzano has experience litigating on behalf of both employees and employers. As a member and board member of the National Employment Lawyers Association, Mr. Valenzano believes everyone deserves a voice – especially those who have unfairly lost their job due to the insidious and shameful discrimination of their employer. Mr. Valenzano became an employment lawyer so that he could speak up for and defend workers who are unable to defend themselves against the disproportionate power of their employer.

Throughout his career, Mr. Valenzano has successfully litigated against international corporations, counties and municipalities, the State of New Jersey and the Federal Government. In addition, Mr. Valenzano routinely represents public employees such as teachers, police officers, and corrections officers when they are being unjustly brought up on phony disciplinary charges. Mr. Valenzano does not shy away from complex litigation matters. In addition to litigating employment discrimination and whistleblower matters, Mr. Valenzano has successfully litigated personal injury matters, consumer fraud matters, shareholder disputes, partnership disputes, and the enforceability of restrictive covenants.

Recently, Mr. Valenzano successfully argued before the New Jersey Appellate Division in Roman v. Bergen Logistics, 456 NJ Super. 157, where the court held that an arbitration agreement’s bar of punitive damage claims under the New Jersey Law Against Discrimination (“LAD”) was unenforceable because it violates the public policy of “eradicating the cancer of discrimination” embodied in the LAD. Beyond his passion for litigation, Mr. Valenzano has considerable experience representing small businesses, partnerships, and sole proprietors in transactional work, such as preparing employment agreements, employee handbooks, operating agreements, shareholder’s agreements, partnership agreements, stockholder agreements, and by-laws. Mr. Valenzano has also successfully negotiated several sales, mergers, and acquisitions on behalf of small and mid-size businesses within the State of New Jersey.

Mr. Valenzano graduated from Rutgers University where he earned a Bachelor of Arts Degree with a major in Sociology. Before embarking on his legal career, Mr. Valenzano worked for United Cerebral Palsy as a Medicaid Service Coordinator providing access to social services to families caring for loved ones with disabilities and special health care needs in the New York City boroughs of Brooklyn, Bronx and Manhattan. After several years working for United Cerebral Palsy, Mr. Valenzano attended Touro Law Center in Long Island, New York where he earned his Juris Doctor Degree. Mr. Valenzano served as President of the Touro Law Center Student Bar Association from 2009-2010. Upon graduation from law school, Mr. Valenzano was awarded the Excellence in Contribution to the Growth of the Law Center Award by the administration and faculty of Touro Law Center. Additionally, Mr. Valenzano served as the notes and comments editor of the Touro Law Center International Law Review and received an award in 2009 for Academic Excellence in the Study of International Human Rights. 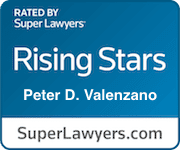 *Peter D. Valenzano was selected to the 2020 Super Lawyers Rising Star list (issued by Thomson Reuters). Learn more about the selection process methodology here. No aspect of this advertisement has been approved by the Supreme Court of New Jersey.